Architect Roger Barrett studied under & worked with four Pritzker Prize-winning architects - Glenn Murcutt, Fumihiko Maki, Rafael Moneo and Richard Meier. Here he reflects on these relationships and their influence on his practice.

OUTSIDE THE SQUARE: FOUR MODERNS 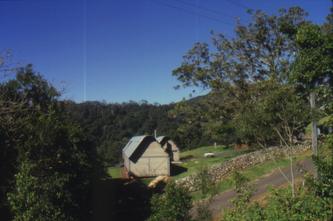 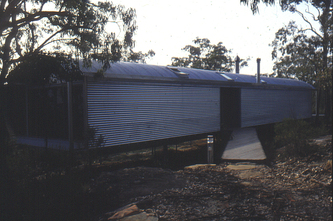 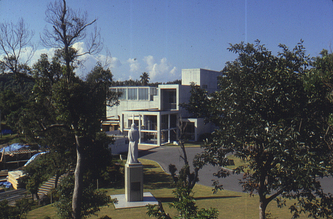 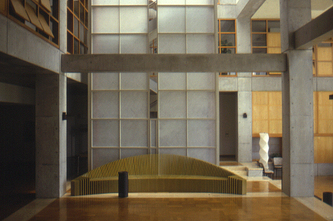 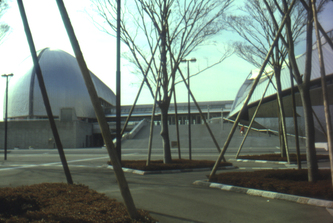 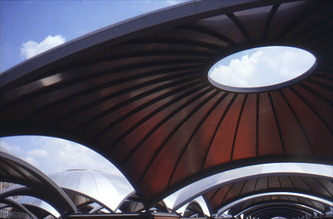 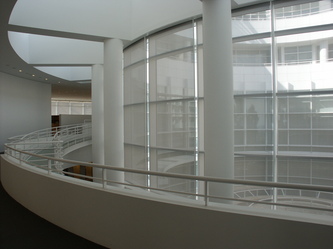 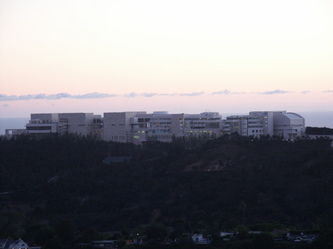 posted 28/01/10
previously published in "Indesign" Magazine Vol.30 August 2007
This brief essay recounts my personal experience of exposure to 4 Moderns, Glenn Murcutt (b.1936), Fumihiko Maki (b.1928), Rafael Moneo (b.1937) and Richard Meier (b.1934). All were considered at the time or would later be viewed as amongst the top architects of their respective countries Australia, Japan, Spain and the United States, and all were or later became recipients of the Pritzker prize in architecture. This is not intended as an academic analysis of their work, rather, a reflection on a series of relationships highly influential to me as a student and young architect, forming a foundation of how our practice works today. There were other architects with whom I studied, worked, and collaborated who taught me a great deal, but that is not the subject of this essay.

These four architects are part of a generation of at least a dozen internationally known contemporary architects which have managed to dominate the global architecture scene for some decades (which include some of those discussed in Moneo’s own recent book “Theoretical Anxiety and Design Strategies in the Work of Eight Contemporary Architects”). They emerged in the same generation of modernism, with the same internationalist influences of Le Corbusier, Wright, Mies van der Rohe, Kahn, Sert, Chareau and others. They emerged in post WWII and post-Franco environments in a prolonged period of economic growth and political stability, as their own countries became some of the most affluent industrialised nations. The architecture of each came to somehow represent the sentiment or spirit of each nation at a point in time and widely influenced others, even from a comparatively small body of work (though larger than Barragan’s). They really were defined as Australian, Japanese, Spanish and American architects, and while some have done a lot of work outside their own countries, their clients in the end sought an Australian, Japanese, Spanish or American cultural product.

They established themselves following the architect-as-artist model rather than working up and into an evolving corporate commercial entity. They enjoyed a level of financial independence which enabled them to reasonably quickly establish their own start-up architectural practices and pursue creative work very much on their own terms. They enjoyed social and family backgrounds which led to a good client base in the early years. Theirs was not Frank Gehry’s “truck-driver becomes architect” experience. They ran commercially viable practices without the need to become commercial architects. They all defined a reality in which to construe architecture somehow slightly separated from the commercial obsessions of the mainstream world, their ideas sometimes coming from an almost dream-like state.

Some were writers, one a painter. Some were academically gifted as students, some led extensive academic professional careers in addition to their practice.

They were, and still are, largely characterised by an absence of arrogance, a willingness to learn, improve their product, not to believe too deeply the aura built up by the media around them. As Murcutt pointed out “You are only as good as your last work.”

They did universally think “outside the square” to produce startlingly fresh solutions to problems and approaches in building design.

My relationships with these architects developed firstly in final year studies at Sydney University in 1984, when I was undertaking a thesis study of Kenneth Frampton’s theory of “Critical Regionalism”.

Glenn Murcutt was my final semester design tutor. The Murcutt studio came about when a group of students including myself formed an independent final year design studio for an Australian Landscape Museum on a few sites around Sydney. I wrote the brief for the group, and asked Glenn to be my critic. After this, Glenn became mentor and confidant, recommender for scholarships and studies overseas, and an advisor until I started my own practice late 1993. Once out on my own, I was left on my own.

Murcutt displayed enormous personal skills, empathy, and sensitivity, essential for a lifetime practice based largely on residential works delicately sited in natural landscapes. He taught the importance of responding to the site, of learning from indigenous culture when designing for landscapes. His Miesian influence, perfectionism and love of simplicity led to a coherent and rigorous thematic continuity with each progressive linear building form. He was generous in attributing credit to others, and that reflected well on him, although seemingly fragile despite his wide influence. There is no doubt he wanted the recognition while some of his contemporaries produced fine work in relative obscurity. His best works were “out there” (in the landscape), free from constraints (other than budget), and actually little seen in person by most.

The relationship with Fumihiko Maki started when I visited Japan in early 1984 on a study of Japanese architectural practice and education. In 1986, as recipient of the Byera Hadley Travelling Scholarship (for a study “3 Places: 3 Architects), I then travelled to Japan to work with him. Maki spoke English, was in Tokyo, and as a Harvard graduate (under Sert) became a mentor for further study. We entered and won the competition for the Makuhari Messe in Tokyo, and prepared the schematic design for the Yerba Buena Centre for the Visual Arts in San Francisco.

Fumihiko Maki displayed a fierce intellect, the “great mind” able to reconcile Eastern and Western beliefs. He was an urbanist, with highly developed theoretical base and body of writings as well as buildings. His treatise “Investigations in Collective Form” underpinned his notion of space and group form, ideas about the city and concept of order. He was interested in the embodiment of Japanese traditions of aesthetics and space in contemporary architecture. He accepted the many constraints of urban Japan as envelopes of creativity, and some of his best works were the most constrained (but not by budget). The volume of his work was large, partly by relationship with Japanese construction companies, and diverse, by way of his background in urban design. And the Japanese worked at a frenetic pace, every night late at the office. Each of Maki’s buildings was different, even when adapting the structural technology of gymnasiums over pregressive commissions. He was interested in the use of tiled surface and metal cladding, of detail developed during construction. His building designs were approached as fresh compositions on each occasion, informed by the specifics of site and context, the brief, the client. His signature had wide permutations.

In 1986 I entered the Master in Architecture program at Harvard under the chairmanship of Rafael Moneo of Madrid. This was my introduction to the Latin world. Entry into the architecture program was exceptionally competitive as it was one of the best in the world at the time. Rafael was celebrated in the school and I took history and theory classes with him as well as having him as critic on many of my reviews. During 1986-88 this was Rafael Moneo’s school, and he brought with him a phalanx of distinguished European and American faculty. Teachings were based very much around the European-American dialogue. The relationship with Moneo continued after graduation, I visited many of his buildings in Spain and his atelier in Madrid, and entered into a correspondence through the early years of my practice.

Moneo displayed both a cultural wealth and a sense of humanity through a rigorous dialogue. Grounded in the (latin) European tradition, his seminal paper “On Typology” became a student’s primer. Moneo instructed design as an extension of drawing, and drawing as the basis of visual literacy. His buildings bore a cultural depth and sense of impeccable taste. He was a ferocious critic, an authority from Madrid, one of an elite, a demanding yet compassionate professor and architect. He had a refined sense of materiality, combining tradition and modernity with European concepts of urban form and space. Moneo was a masonry architect, expert in the use of brick, tile, and concrete, reinterpreting traditional forms and combining them with a modernist language. Some of his works were figurative, recalling classical architecture, others abstract compositions more influenced by an interest in pure geometry. His work displayed a profound sensitivity to the tectonic qualities of building, of acoustics and materiality. They had great presence, warmth and sense of durability.

After Harvard I was offered a position to work with Richard Meier on the design of the new Getty Centre in Los Angeles. I moved to LA and joined the team for a three year commitment 1989-92. Richard spent about one-third of his time in LA, one-third in NY and one-third in Europe, and the day-to-day design supervision of the office was run by his partners. I worked extensively on the radial Research Institute and other aspects of the Getty, and we also designed a small medical tower in Singapore. I left the office to return to Australia after 7 years abroad, only recently visiting the completed Getty.

Richard Meier held a well known and almost obsessive visual preoccupation with white and the grid, with light and space. He ran his office with an iron fist, in absolute control of the smallest detail, pushing staff to their limits, anxious that finally he would be portrayed as ultimate artistic author of his many buildings despite the many hands at work. An incredibly rigorous designer, he would pursue solution after solution before settling on the best. He would ruthlessly search for the best, and inevitably get it. However, he knew the art of compromise and when it was in his interest to do so. He was silent, methodical and had a way of doing things refined over successive years and projects. He knew how to delegate, in fact almost franchise, and so his offices in NY & LA and on European sites grew substantially during my time with him, at the peak of his powers. He was an accomplished businessman, an artist in executive clothes.  We would sit for hours drawing with excruciating clarity the minutest detail and as well axonometric and perspective projections of the designs. At each stage of the process, schemes would be drawn with the precision and finality of construction documents so that he and the client could really understand how the project would look. The design was built up out of drawing and drawing was an art perfected.

These four architects are very much a product of the countries in which they emerged. They carried and were swept away by the ideas of the time, and had each person been somewhere else, history would be different.

Today we have a much more globalised world, with great accessibility to cross boundary information and culture as never before. “Wallpaper” magazine offers us global shopping, global lifestyles and global choices. But at the same time terror and oil spikes make that fantasy harder to realise. The problems of terrorism and climate change are problems of the sustainability of civilizations. A greater level of cross national participation and understanding than ever before will be required to solve these problems. Architects will need increasingly to be able to sit across boundaries, to cross cultures, to be of more than one place while simultaneously reinforcing the place characters where they choose to be. Their work will need to be intelligible and appreciable by more.

Architects of the developing world are increasingly likely to capture the attention of the media as new economies grow, local scenes become more sophisticated and many more countries develop their own media to challenge the traditional hegemonies. Peripheral locations will become more central as technology overcomes the “tyranny of distance” and the centres’ influence will be diminished. There will be many more enjoying Andy Warhol’s promised fifteen minutes of fame and as new media forms emerge so too will new avenues for expression by architects. And in turn will new expressive media will generate new ideas about space, form and place.