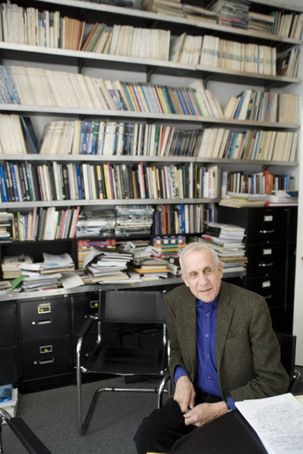 Photo: Timothy Bell
Kenneth Frampron, Ware Professor at Columbia University, is a highly regarded & widely published New York based Anglo-American writer and critic. Roger Barrett undertook his major graduating study at Sydney University in 1984 on  the subject of Kenneth Frampton's proposition of a "Critical Regionalism". After many years of conversations with Kenneth, Roger asks a few further questions ...
RB:  How do we get a better overall standard of design in architecture? Is it through regulation, education and training, commissioning, media discourse, production systems? What else can you propose?

KF: The euphemistic deregulation of the profession amongst other liberal professions has had a deleterious effect on architectural education particularly in terms of studio training. A rather striking example of this may be found in the ESTA school, Madrid where the quality of the final theses has declined over the last decade due to the standardization of architectural education under the auspicies of the “free market” of the European Community. It used to take around 8 years to graduate from Madrid with a thesis where a single public building was invariably the topic. The building was designed to such a level of detail that one could quite literally realize the work. Every detail was resolved, including the mechanical services. The other factor of course is the quality of candidates admitted to the field. I believe that in the Technical University of Helsinki, the Department of Architecture is still the most difficult to get into. We are surely producing too many architects and not at a high enough level. This has been a latent problem worldwide for over three decades. The lowering of standards through deregulation comes about as a result of seeking to treat the built environment as though it were just one more commodity. In relation to this building legislation is far from neutral. The laws are written with a particular kind of development in mind. Suburbanized sub-division and strip development do not occur in the automotive megapolis by accident.

RB: Here in Sydney, since the building of the Opera House in 1959-73, few open design competitions have led to built outcomes, and often the development of winning schemes is discontinued or alternative options pursued. Is this unusual? What do you think brings about this disregard for jury decisions? Are competitions the best way to achieve quality design outcomes?

KF: In some countries, such as Spain and Finland, almost all public buildings are decided by the competition process. Every building in Spain even the most mundane has to be designed by an architect. I am somewhat confused about the situation in Australia. Of course you cannot assume quality in the competition process if the jury is not carefully selected or if there are too many jurors. I would say from 3 to 5 is optimum. Obviously disregarding a jury decision is a cynical public relations exercise carried out in the name of the market, corruption and futility much like contemporary American foreign policy with Australia going along for the ride. If the competition system is properly run it usually produces good results.

KF: I take it that by multi-residential you are referring to that which used to be called habitat, which I prefer to think of as a matter of land settlement. If there is a modern invention that has had (and is still having) an apocalyptic effect on both the species being and the natural world it is surely the automobile. For all that China is a technocratic command economy its leadership seems unable to imitate at a higher density the megalopolitan automotive land settlement pattern adopted in the US. To date China’s investment in public transportation is pathetically small. Sustainable residential design of quality is not only a matter of low to medium rise settlement at fairly high densities but also of providing adequate space and storage standards appropriate to the moves of middle class life along with appropriate orientation, heat & sound insulation, hybrid sustainable methods of heating, ventilating and cooling, landscape, planting and above all surely a modern but secure image of the dwelling. Latterday neo-avant gardism in architecture is unable to address this last issue since it is too preoccupied with mediatic competition in terms of a spectacular image. In my view Alvar Aalto was one of the last of the modern masters to fully understand and respond to this challenge as we may judge from his canonical medium rise Hansa Viertel block built in Berlin in 1955. The genius of this work resides in the fact that its apartments were handled as though they were elevated country and houses.


RB: Can you name and describe some best-practice examples of multiresidential design from around the world?

KF: I can certainly think of a number of contemporary architects who have realized convincing generic models of habitation and land settlement over the past half century and one might begin by simply citing their names in alphabetical order; Alex Popov, Jose Luis Mateo, Alvaro Siza, Roland Rainer, Baumschlager & Eberle, Atelier 5, Helin and Sittonen, Gullichsen, Kairomo & Vormala, Alejandro Aravena, Rogelio Salmona, Jorn Utzon, Steven Holl, J.A. Coderch. Dorf Schnebli, Giancarlo de Carlo, Michael Neylan, Elias Torres, Raj Rewal, Balkrishna Doshi, Herman Hertzberger. While this list is by no means exhaustive one might remark on the general absence of starchitects from this line up.


RB: Still on the subject of multi-residential design, what changes do you see happening in the near future – contextually, but also in the planning of the individual units?

KF: I have no idea. Generally I am not sanguine about the future. How can one be given the impact of consumerism; the destruction of rainforests, global warming and such ominous indicators as the fact that China will build something like one coal-fired power station a week over the next five years, or that Tata aims to produce a car costing $4500 for the Indian market, or say the fact that within the next decade and half, 300 million Chinese are expected to move from the countryside into the city. The historical “failure” of socialism and the decline of the Wellfare State are hardly good omens not to mention the further disquieting fact that some 10% of the current population of the US is on the border of starvation, not to mention the 45 million who have no health insurance. This is in a country where less than half of the population exercises its right to vote and where under 2% of the population own 80% of the wealth.


RB: Given the contemporary preoccupation with risk-aversion and cost constraint, how do we get developers to use good designers? Do you think public-private partnerships are the way to go? Are you able cite any examples? Moving to broader issues – what are the challenges which architects face over the next decade? Some people say it is a profession in crisis – do you agree? If so, is the crisis resolvable?


KF:  I am not sure how to deal with this whole cluster of questions.  There is not much one can do about the average developer client except perhaps encourage local authorities to play a more critical role in maintaining design standards.  Now and then a developer will come to the fore and work successfully with the same architects over and over again.  I have in mind the work of Togo Diaz in Cordoba, Argentina or more recently perhaps, the work of Bumschlager and Eberle in Voralberg.  The L’Illa block in Barcelona was a magnificent work of urban development funded by the Wintertur Insurance Company.   Public/private partnerships surely have a chance of a successful outcome providing the dog of local government mediates the tail of private profit.  One of the main challenges that face architects is that of designing a socially “accessible” residential environment that is not kitsch.  I have in mind as models such works as Alvaro Aolto’s Berlin Hansa Viertel Block of 1955, or Jorn Utzen’s Fredensberg Housing of around the same date.  Surely it is a profession in crisis particularly when we compare it to the medical or the legal professions.  However, when was it not in crisis?

RB: Where are the architectural ‘hot spots’ in the world today? What conditions have made them flourish? And finally, something specific to Australia – looking at Australian architecture from another place and with a global perspective, what do you see as the defining characteristics, what are its strengths and opportunities, and what does it have to learn from other architectural traditions?


KF: Judged solely by the amount of building being realized in a short space of time I suppose Dubai or Hong Kong or almost anywhere in the Republic of China may be considered “hot spots,” not to mention the general inflationary development of the world’s capital cities.  If, however, one is looking for a culture of architecture, where it is not just a matter of a few star architects working at a global, transcontinental level, then this is generally elusive and equally deceptive to assess and force.  Sometime ago I wrote that I was of the opinion that there were four countries in the world where one could recognized the existence of a culture of contemporary architecture:  defined in terms of there being around 20-30 architects creating quality work around the same time. Then I hand in mind France, Finland, Span and Japan.  I still think that it is still the case in these countries.  To this spectrum I suppose one might add today Ireland, Canada, and Australia.  With regard to this last I have in mind of course such architects as Murcutt, Lewin, Le Plastrier, Sean Godsell, and the late Harry Seidler.  Needless to say I am aware that there are other Australian architects of comparable level unknown to me.