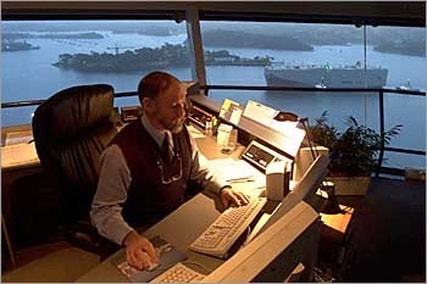 Captain of the keyboard: Alan Cameron at work in the control tower, September 2002. SMH
SYDNEY'S MARITIME SERVICES BOARD TOWER - WHY IT SHOULD NOT BE DEMOLISHED
By Anne Warr
Posted 29.11.15
The text of architect Anne Warr's talk at the SFAUDi Millers Point event on
​November 26th 2015


A short history of the tower's working life
​
In the 1960s a hardstand apron was constructed for container shipping and the headland was cut away.  Construction was completed in 1974: the builder was Sabemo Pty Ltd and the architect - EMTB (Jack Torzillo)
The purpose of the tower was to control shipping movements in and out of Port Jackson. It provided visual sight lines to all major wharfage areas in Sydney.
In 2011 it finally ceased operations (after 37 years) when shipping control was relocated to the Sydney Ports Communications Centre in Port Botany.

The Tower was built on land cleared by the MSB in the 1960's -70's during conversion of the finger wharves at Darling Harbour into longshore roll-on/roll-off container terminals. Earlier it had been the site of the Dalgety's wool store.

Problems of structural strength in high winds  were solved by switching from pre-stressed to reinforced concrete, and increasing the weight of the tower at the top.

Recognition as a heritage item

The Port Operations and Communication Centre is significant in the history and operation of the Port of Sydney.
Since 1790 the European settlers struggled to gain visual communication across the uneven topography of the harbour. These efforts culminated in the construction of the Tower which provided visual oversight of major wharfage areas and the operations of Sydney Harbour for the first time in over 150 years.

The Port Operations and Communications Centre is a prominent landmark and part of the skyline of Sydney Harbour. It is a significant element of the maritime landscape.
​

A short history of the tower's short retirement life:

In 2011 the tower was bought for $2.6 million by the Barangaroo Authority.

On April 30th, 2014, the Barangaroo Authority "considered a number of options for the tower, including adaptive reuse for tourism opportunities and artistic interpretation.  However, due to its limited access, occupational health and safety requirements and significant costs the Authority is seeking planning approval for its demolition,” said CEO of the Barangaroo Delivery Authority, John Tabart.

Non-recognition as a heritage item

23 July 2015: The Minister for Heritage, did not accept the recommendation of the Heritage Council to list the Sydney Harbour Control Tower on SHR:

* I consider that the Tower is not of State heritage significance for importance in demonstrating aesthetic characteristics.
* I consider that while there are conflicting views as to whether the Tower is of State heritage significance for other reasons, in any event a listing would render the Tower incapable of reasonable or economic use, and, in particular, there would be no financially sustainable adaptive reuse of the Tower.

30 July 2015: NSW Government approved a DA from Barangaroo Authority to remove the tower. Reasons given were:  ’in order to achieve a naturalistic form and character for the reserve that is consistent with the site’s concept plan’.
‘An interpretative historical display will be built at the site after demolition, focusing on maritime history and Millers Point.’

"[The tower] does not have a shred of heritage about it," Mr Keating said, adding that it "compromises the naturalism" of the park, which is due to open next year.  Dec 2014.
Asked to respond to Mr Keating's comments, Heritage Council chair Lawrence Nield said "little knowledge of heritage is always dangerous".
"To re-establish what Barangaroo was before white man came is just fraudulent … we need to reflect what has gone on in Sydney since then," he said.
"This is the only thing that is left of Sydney as a working harbour, and it could be used to remember what was one of the great ports of the world.“

1. The Tower looks great in the Park and many people visiting the Park have that opinion.

2. Its vertical design is a good counterpoint to the horizontality of the park terracing and the arch of the harbour bridge.

3. The state government should stop wasting money on pulling down something that is already being put to a productive use. The tower brings in $100,000 per year from its telecommunication aerials.

4. It is the last landmark maritime structure at Millers Point recommended by the Heritage Council for listing on the State Heritage Register.

5. It could be the prime viewing tower for Sydney Harbour, for tourists visiting Sydney.

6. It could be a feature of a proposed Museum of Sydney Harbour in the current empty void beneath Barangaroo Park.

7. It could have images projected on to it during Vivid, illuminations and fireworks..

8. There is scope for alteration and adaptation to the tower for a range of uses including a bistro / restaurant.

9. It was designed by one of Australia’s leading architectural firms who designed the High Court in Canberra and involved CSIRO scientific studies to achieve its structural stability – it was very innovative in its day.


Does it have aesthetic significance?

Artist Jane Cooper Bennett thinks so – check out her paintings of and from the Tower at her blog: janebennettartist.blogspot.com.au

Academic Russell Rodrigo thinks so too – check out details of his student project for the Tower on the UNSW IA blogspot:

The design of a facility to accommodate a new world class restaurant by the internationally acclaimed chef Massimo Bottura in the former Sydney Harbour Control Tower, Barangaroo
The project was for a restaurant for Massimo Bottura, seating only 6-8 people ​
​ 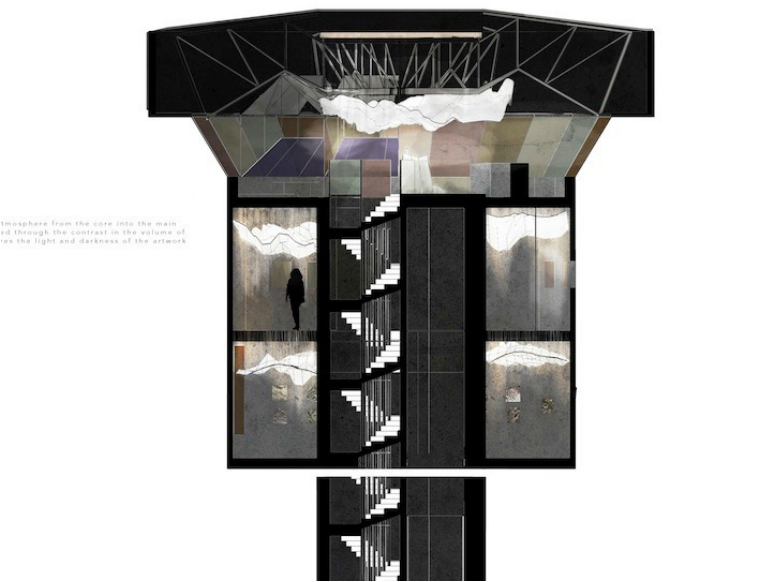 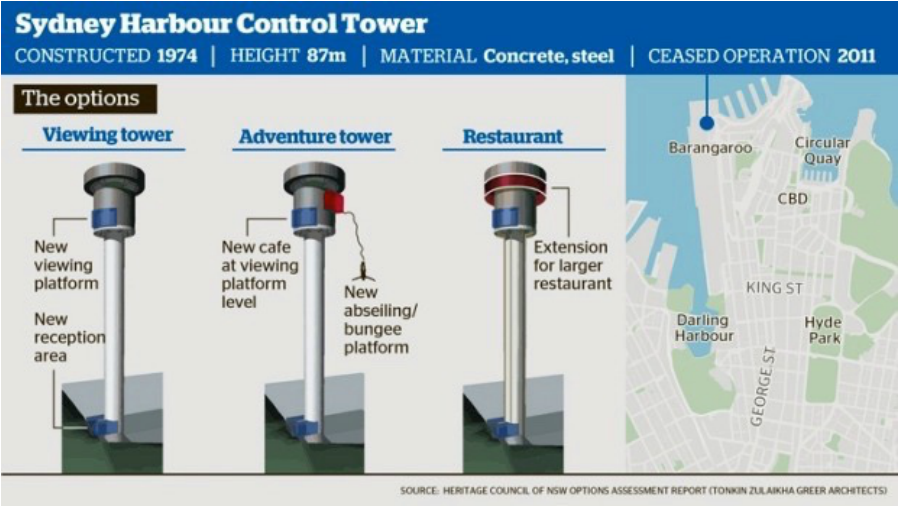 ​Why do I think it should stay?

What sort of city do we end up with if the marginalized, the ugly, the non-functional, the non-economic, are removed?
The removal of the tower symbolizes the triumph of middle class values over working class values – the final cleaning out of Millers Point.
The master narrative of Barangaroo allows only certain stories to be told - interpreting the past, rather than allowing it to speak for itself, as illustrated by this excerpt from the Barangaroo Fact Sheet, Nov 2014:

Celebrating our heritage
​
The development of Barangaroo has led to the interpretation of multiple layers of heritage from pre-colonial to modern industrial maritime.