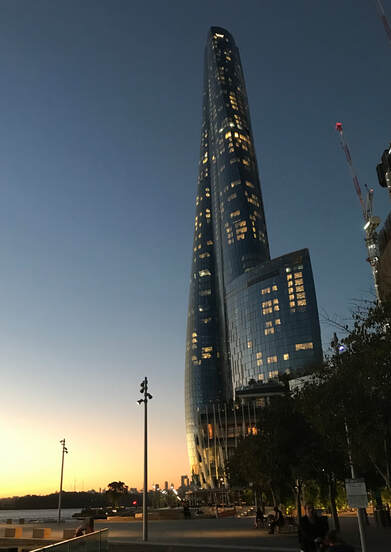 ​
​THE RISE AND RISE OF SYDNEY?

Paul McGillick asks some questions
about the future of Sydney
in the light of rising height limits.

The Harbour with its necklace of bays and surrounding topography of gentle hills and defining ridges creates an experience which is simultaneously varied, panoramic and intimate.

This remains largely true of central Sydney as well. Despite evolving rapidly since the 1960s into an ‘international’ city –  and despite many mis-steps along the way – Sydney has managed to retain a lot of its character as a human-scaled, even intimate city. One reason for this is that it is long and narrow and actually quite small – 1.3 kms east to west and 3.5 kms from Walsh Bay at its northern edge to Central Station on the south.

The fact is Sydney Central is actually a peninsula defined by the Harbour on the north, the Royal Botanic Gardens and Hyde Park to the east, railway yards to the south and Darling Harbour on the west.

This has proved to be both an asset and a problem and much of it is related to building heights.

Beginning in 1908, Sydney has had restrictions on the maximum height of buildings. And despite recent changes it still has because the Civil Aviation Authority can require limits in the interest of air safety. 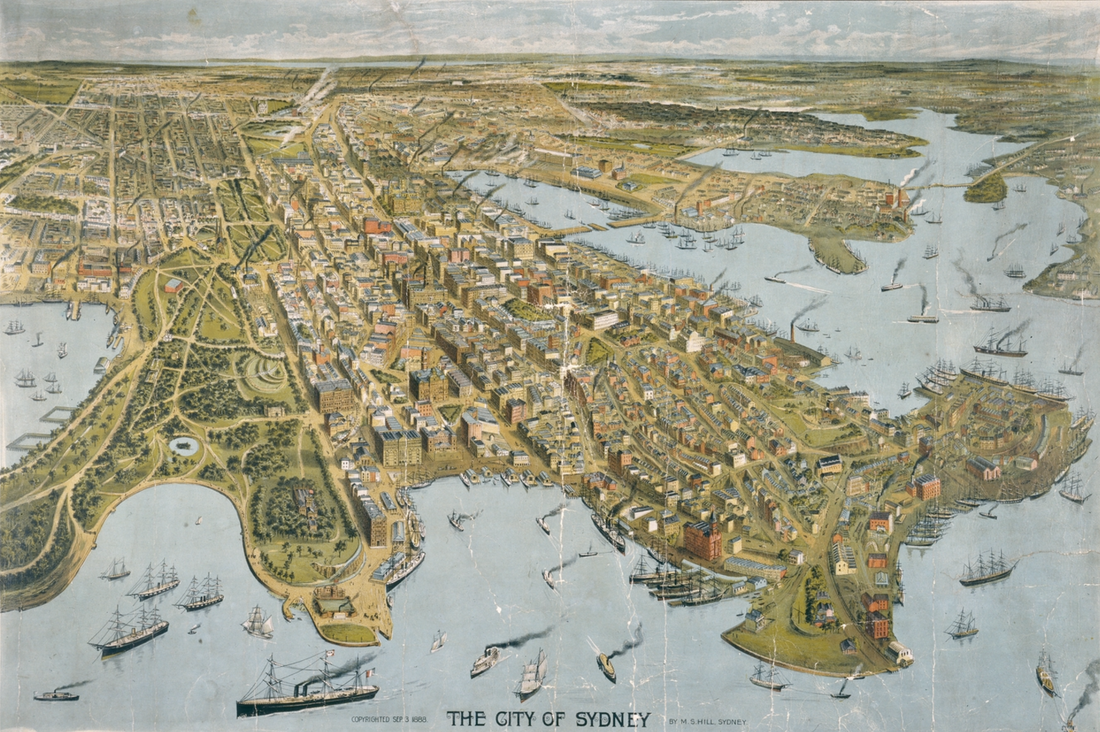 This birds-eye view map of Sydney was published in 1888. It shows Sydney as a bustling port settlement. Most of the buildings depicted here have long gone, the GPO building in Martin Place and the Customs House facing Circular Quay among the few that still exist today.
In 1912 a height limit of 150 feet (45.7 metres) was introduced in response to concerns about fire safety. Although the State government could approve exceptions, this resulted in buildings limited to 10-15 storeys until 1957. In this year, the AMP Building was approved (after a lengthy campaign) at 188 metres (45 storeys). This was completed in 1962 and, in 1966, Australia Square was built at 170 metres (46 storeys).

Both buildings were made possible through the consolidation of smaller blocks. Significantly both buildings sacrificed space at ground level for public amenity. The AMP Building occupies just 55% of the plot, the rest forming an urban plaza. Australia Square occupies just 25% of the site because its architect, Harry Seidler, famously wanted to optimise space and sunlight at ground level as a gesture of civic responsibility and so designed an expansive and popular plaza area. Seidler continued this strategy with the MLC Centre (1977) which stands at 228 metres with 67 storeys.

For some time a height limit of 235 metres remained in place with a notional limit based on the idea that no building should exceed the height of Sydney Tower which had been built in 1981 to a height of 303 metres. Barangaroo had special dispensation as a State-significant site and might be seen as the thin edge of the wedge. Sure enough, in 2019, the maximum permissable height was set at 330 metres, allowing significantly higher buildings to be proposed at Barangaroo, Central Station, Circular Quay and Town Hall.

Approval for higher buildings is contingent on a “zoning envelope” as part of a Sydney City Council strategic plan to protect important public spaces (such as Martin Place, the Botanic Gardens, the Domain etc.) and ensure “sunlight angles”.

This seems little different from the brief of the Height of Building Advisory Committee (HoBAC) set up in the late 1950s by the State Government to supervise overshadowing of public space, wind control, respect for heritage buildings and overall scale.

This brings us back to the ‘problem’ – namely, the topographical limitations on the extent of the Sydney CBD which, in turn, entails a property constraint with a limit on the amount of commercial and residential floor space available. It is argued that this, then, becomes a constraint on Sydney’s desirability as an ‘international’ city, discouraging investment and undermining Sydney’s attraction as an international commercial hub.

The SCC predicts that, by 2036, two million people will visit the CBD on a daily basis, while the population of Sydney will grow from 4.3 million to 5.9 million. By raising the height limit to 330 metres, the SCC argues that an extra 2.9 million square metres of floor space will be created in the CBD, a 30% increase. It is also proposing tripling the New Construction Levy to 3% to raise revenue for city infrastructure development.

At the same time, the SCC is selling ‘air rights’ over heritage buildings (such as Hyde Park Barracks, which recently raised $20 million) as a way of financing heritage conservation. The State Government, too, is selling air space. It raised $50 million for the space above the entrance to Wynyard Station and $350 million for the air space above the new Martin Place metro station. Developers can ‘bank’ the space and transfer it to new building projects as a way of getting around planning controls – namely, height limits and floor space ratios. The fear must be that sweeteners like these will be yet another thin edge of the wedge leading to compromised planning controls.

Meanwhile, high rise accelerates in previously suburban areas such as Chatswood, Parramatta, North Sydney, St Leonards and Macquarie Park.
​
Of course there are good arguments for increased density which can sustainably accommodate rapid population growth. But it is worth asking a few questions before we give up on height limits altogether.

Firstly, when buildings go over 300 metres they quickly become less sustainable for cost and environmental reasons. Buildings straining towards one kilometre in height in places like the Middle East are more about breast-beating than pragmatics. Do we want the Sydney CBD to be host to over-scaled icons at the expense of its remnant character?

The setting sun reflected in the north west facade of the Crown tower in Barangaroo, with One Sydney Harbour, designed by Renzo Piano, under construction to the left. Photo by Hamish Robertson
And when we fret about Sydney staying the pace as an ‘international’ city, are we missing the wood for the trees? Sydney is attractive for many better reasons than the quality of its high-rise towers. For these reasons Sydney may be better served staying at a more modest scale with its sunlight, ground space and view corridors protected – after all, past experience tells us that, notwithstanding caveats and oversight, the urban experience of Sydney has already been significantly compromised.

And if we are to go into a new era of even higher buildings, should we not go back to buildings like the AMP, Australia Square and the MLC Centre as models for how high rise buildings relate to the ground plane for a richer rather than a poorer urban experience?
​
Finally, how does the Sydney CBD strategic plan relate to the Greater Sydney Region Plan: A Metropolis of Three Cities with its core concept of walkable satellite cities? Sydney may be the jewel in the crown, but it takes a number jewels to make up a crown. How do we want the Sydney CBD to relate to the other jewels?