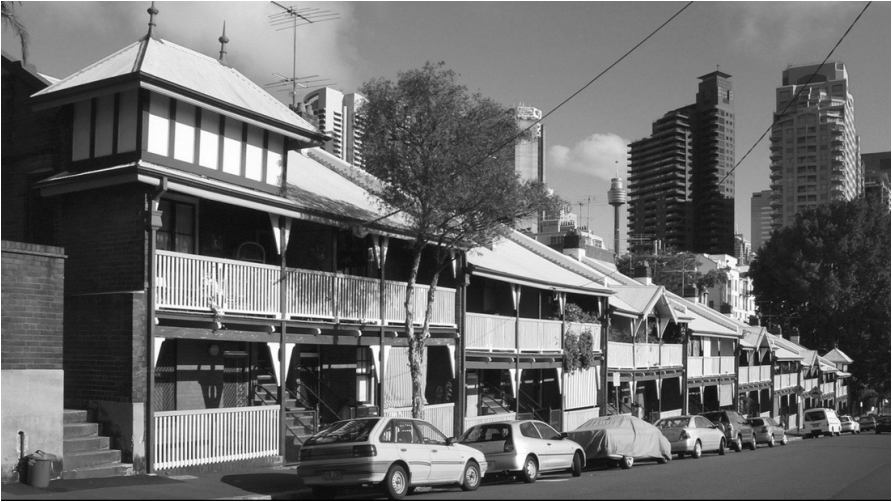 Workers' Housing in Millers Point - A Model for Today?


MICHAEL ZANARDO is an architect and urban designer specialising in the design of housing, particularly social and affordable housing. He is currently undertaking a doctorate at the University of Sydney looking at architectural typologies in pre-World War II workers’ housing in Sydney. On November 26th, 2015 he gave a talk to SFAUDI on early 20th Century social housing in Miller’s Point in Sydney.

I will be talking to you tonight about some of the architectural ideas embodied in the social housing in High Street, Lower Fort Street and Gloucester Street.

At the turn of the 20th Century Victorian Sydney was just emerging from the effects of the 1890s depression. The gold mining boom was over and people were returning to the cities en masse looking for work. The only options for the working class were home ownership which was unobtainable for almost all of them or private rentals at the mercy of landlords, often absent landlords, and investors. There was no system of public housing to fall back upon. The urban working class had to fend for themselves, leading a subsistence level existence with poor housing conditions. These dwellings were jerry built, tightly packed and they lacked sanitation and fell into slum conditions.

Discussion of slum clearance had begun as early as the 1890s. However, it was not until 1900 that the crisis of the bubonic plague galvanised the government into action. The outbreak of bubonic plague in 1900 was attributed to slum conditions and spurred intense reform. The state government of NSW at the time passed legislation enabling the resumption of private property. Terrace houses were deemed unfit for occupation and were demolished and numerous streets were re-aligned. The Sydney Harbour Trust was formed in 1901 and charged with the re-modelling and re-construction of the area. Whilst the Trust rented out acquired properties to workers, effectively making it the first public housing authority in NSW, it wasn’t its main area of activity and all of the new streets and the massive wharf facilities they were building meant that replacing the demolished buildings wasn’t their first priority.

In 1908, a royal commission was set up to consider increased government involvement in city improvements. Among its many findings one was that the government had a responsibility to provide accommodation for its workers. It preferred, however, to make that accommodation outside the city invariably in the form of freestanding housing – Daceyville, the great housing estates, that suburban story of housing, probably more accurately called ‘anti-urban’. But there was also a very strong urban story which starts here in Millers Point. The chairman of the Sydney Harbour Trust was resistant to housing being built locally and argued that the land was far too valuable for this use. However, there was clearly a conflict because the waterside workers needed to be on call close to their work, which made living alongside the wharves necessary. The housing which was eventually developed is known to be the first purpose-built government affordable housing in Sydney. There was a small project up in Newcastle which pre-dates it.

In designing and constructing the housing, the government took the opportunity to do more than just house its workers in an expeditious way. The sheer scale of the projects, as well as advances in construction quality and technology marked them out as innovative. Some of the projects even acquired an emblematic status serving as best-practice demonstration projects intending to lead the private market by example.
An understanding of architectural typologies allows architects to select an appropriate solution in principle and then adjust it to suit the circumstances. Types become a design shorthand for more complex architectural ideas. By studying these buildings, the knowledge in them can be brought to life and used to design new affordable housing and new social housing in Sydney.

The first project tonight is the High Street flats, usually attributed to Henry Deane Walsh, built in 1910. Only the terraces in Windmill Street pre-dates it, but High Street flats were the first of the projects which think about a denser form of housing than the terrace houses. Looking at the plans, one of the things that you see is that it appears as a terrace house plan mirrored around the party wall, then copied along the street 18 times.
A wonderful thing about the High Street flats is the front door. You have two front doors on the street and then a central stair. At the top of that central stair it gets a little bit wider, then two more front doors. All of the front doors are directly accessible from the street. It is an idea about housing, about address and about activity on the street that we have lost today in apartment buildings.

Another idea embodied in this project is that the project was made as part of the re-development of an entire area. There is incredible efficiency in the way this building sits on a piece of land. The street as laid out with the block and the lane and the depth of this housing fits that perfectly. This is incredibly high density at two storeys. It suggests the possibly of ‘thicker’ cities rather than taller cities in order to increase density.
Also, in terms of private open space, the ground floor gets a small courtyard and the upper floor gets the roof terrace. Each dwelling has a useful open space.

The second project is the Lower Fort Street flats by Walter Liberty Vernon, the Government Architect. This project also densifies an existing type, the semi-detached dwelling. This project was innovative in the way it dealt with a strangely shaped site. Each of the floorplans is identical with the first three mirrored. Then you get the bend in the site where a special type is designed to turn the corner. The design is calibrated to fit that site. All of the circulation in this building is external. It is not enclosed and does not need to be lit during the day or mechanically ventilated. Very environmental. This is a three-storey walk-up with external stair entry.
Finally, the Gloucester Street duplexes, variously attributed to the Resumed Properties Department and the Public Works Department. I haven’t been able to source the original plans, they have been missing for a long time. It is a really interesting building on a very steep site. This is a  four storey building with three levels above the street and one below. Two-storey duplexes at the top and two-storey duplexes at the bottom. It is one of the first residential buildings in Sydney I know of which uses the gallery corridor, a fore-runner of the ‘street in the sky’. Again, typical units are designed for the majority of the building, with a special type used to resolve the site geometry.

The value of this housing is not just sentimental or nostalgic. There is information in these buildings which is useful to the design of buildings today, helping to informs models for future housing.