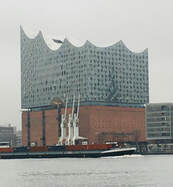 Julius Bokor presents his view of an enigmatic
new building in the German city of Hamburg. 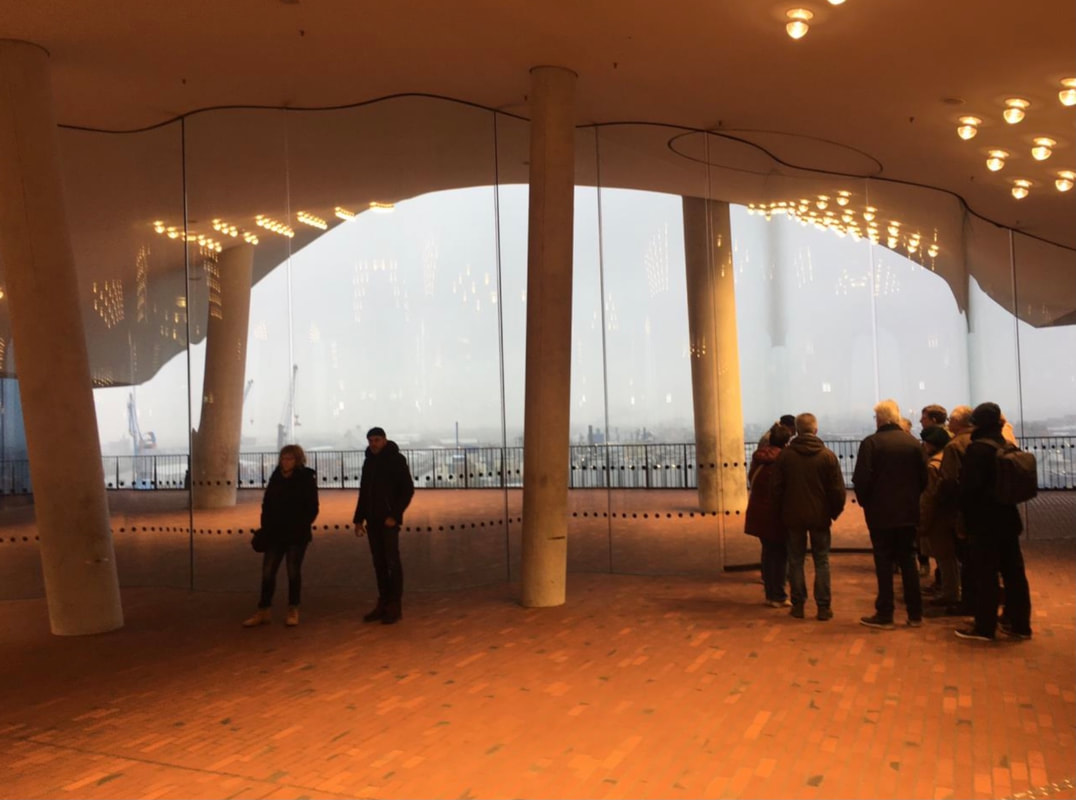 The main lobby of the Elbphilharmonie complex in Hamburg
​In November 2019, just before the Covid 19 pandemic was declared, I flew to Hamburg for four days to see old friends. I hired a car to go to Dessau to see the beautifully restored Bauhaus buildings on the 100-year celebration of that movement. I had friends in Hamburg, who returned to their native city after 30 years living in Australia. They gave me an informed introduction, by land and sea to Hamburg and tried to infect me with their love for the city.

I chose to stay at the Westin Hotel which is part of the recently completed Elbphiharmonie complex and attended a concert in the new Philharmonic Hall that gives its name to the building. Ever since the first ideas were presented for this building in the architectural press, over 10 years ago, I have found the project counterintuitive, and perverse in some ways.

​I will try to share my reactions following the project's long development, and my conclusions, after a four day visit trying to understand the enigmatic nature of this major recent building by Herzog and de Meuron architecture studio. 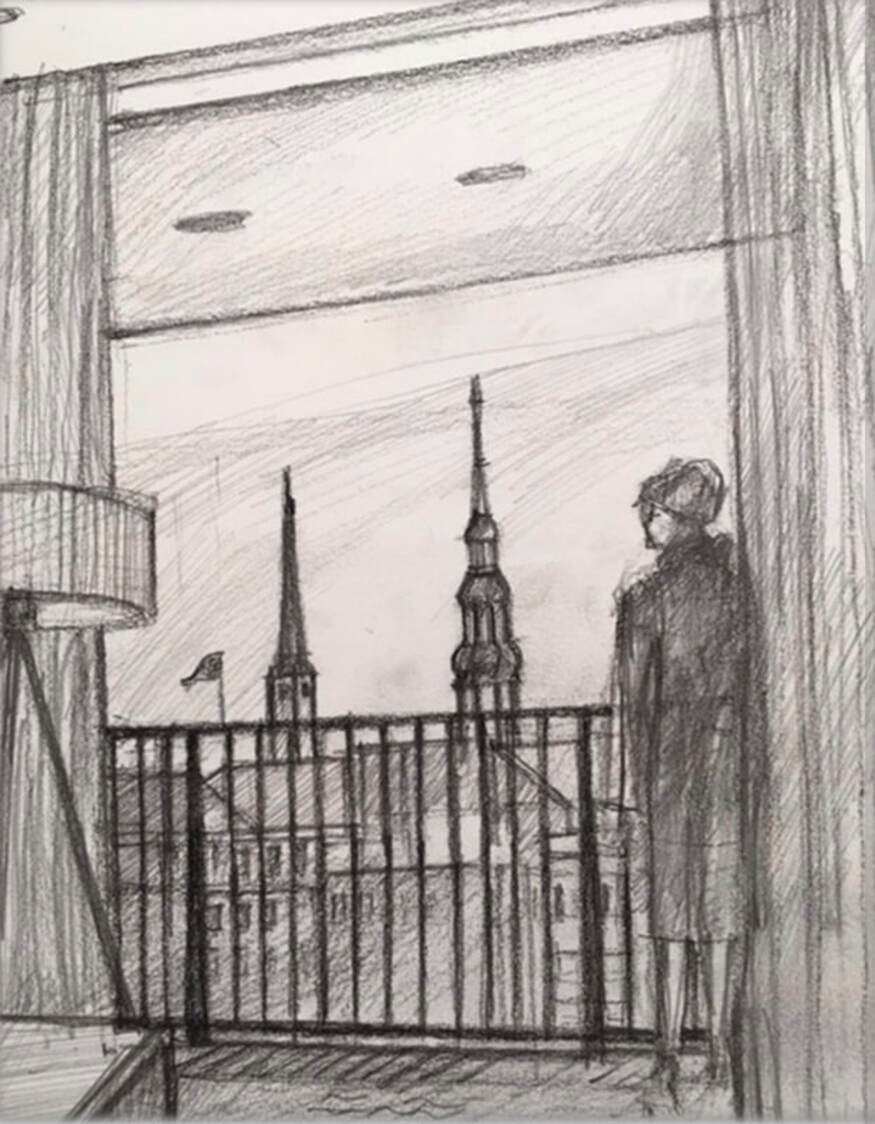 View of the public promenade - sketch by Julius Bokor
The site is a narrow irregularly shaped promontory with water on three sides.It was the site of the most famous of Hamburg’s many warehouses that were destroyed by allied bombing in the Second World War. The destroyed building was in many ways the preeminent symbol of Hamburg’s global importance and prosperity. The 1960’s building that replaced it is a nondescript utilitarian structure that did not do justice to this significant site. This 1960s building forms the base of the new building, repurposed internally so mostly only the brick façade remains, and it now accommodates parking and mostly utilitarian functions. There is no doubt this building has become a symbol of Hamburg’s rise from the ashes. 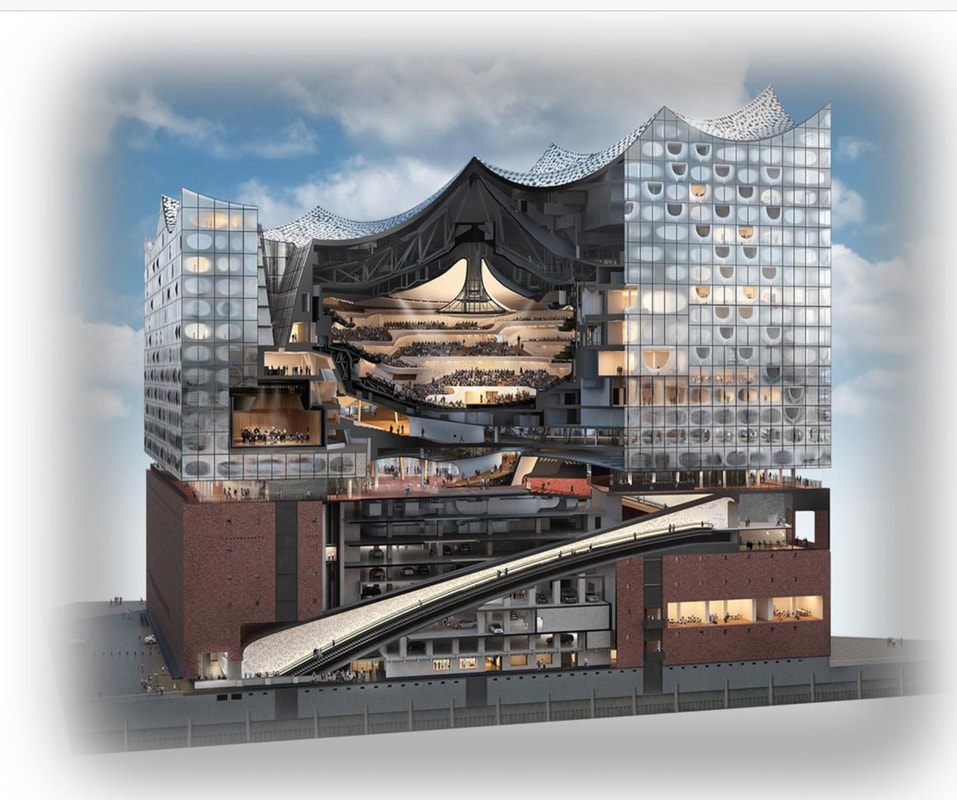 Elbphilharmonie - cross section by House Infographics
It is commonplace to talk of the Bilbao effect, but I propose in this case to refer to the Sydney Opera House effect. It is on a similar maritime site, surrounded by an important working harbour. The owners of the Hamburg site and warehouse building in collaboration with the architects, made an unsolicited proposal to the city, to develop the site and presented the initial idea that was enthusiastically supported by the city and general public. It was perceived from the start as representing not only the renewed prosperity but the cultural aspirations of the city as well. The building from the outset was to be multi- functional, incorporating a hotel and luxury apartments, to make the project financially viable, although eventually the building cost three times the original budget, frugal compared to the Sydney Opera House 20 times its budget. The building was to rise phoenix like from the destroyed 19th century building and at the same time enliven and validate the redevelopment of the whole adjacent district. In many ways the resulting image defies conventional concepts of rational Modern Architecture. 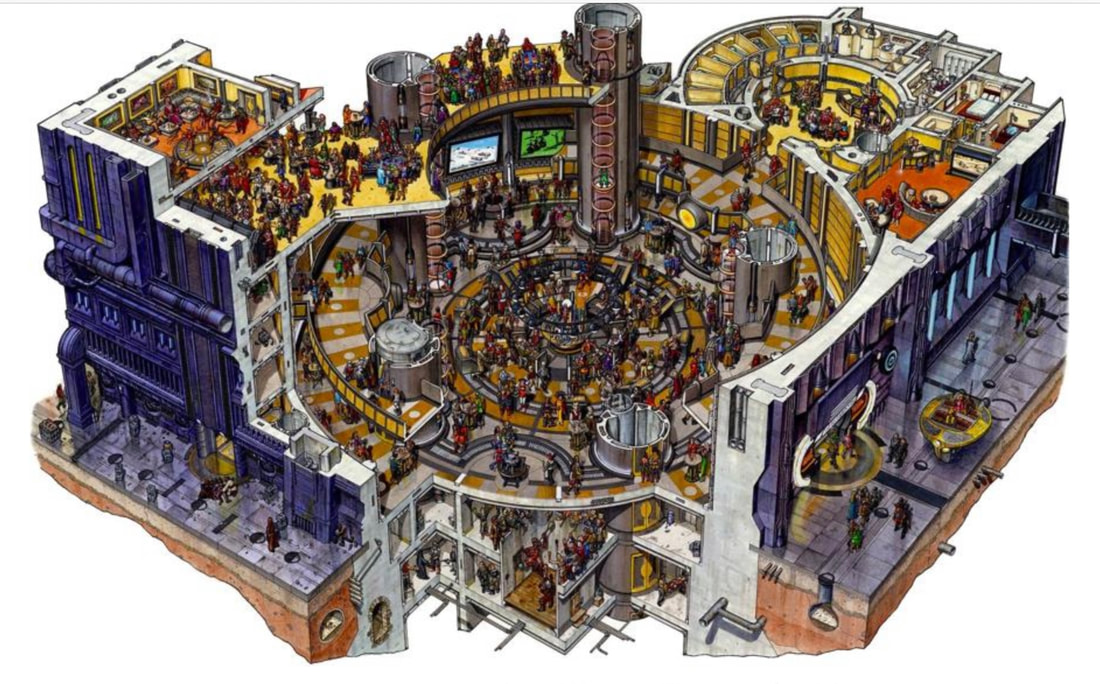 Star Wars - Floating buildings inspiration
The usual requirement for a competition was waived and the long process of approvals, financing and technical solutions to make the idea a reality began, lasting over 10 years. It involved court cases and inquiries, and very nearly destroyed the architects. 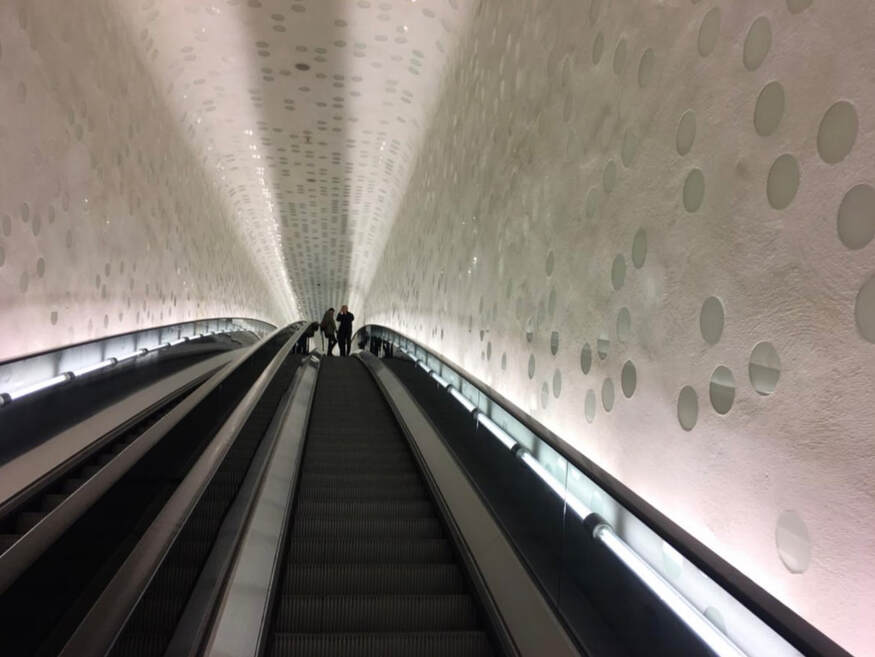 The escalator - photo by Julius Bokor
​The building is an enigma, and I will try to decipher some aspects of the project. The architects are known for creating buildings with poetic imagery symbolically charged, such as the 2008, Beijing stadium, known as “The Bird’s Nest”. The often conventionally planned functional buildings are wrapped in a unifying façade that is memorable and innovative. The facades are objects in themselves, unlike the sculptural and tectonic resolution by other leading architects. 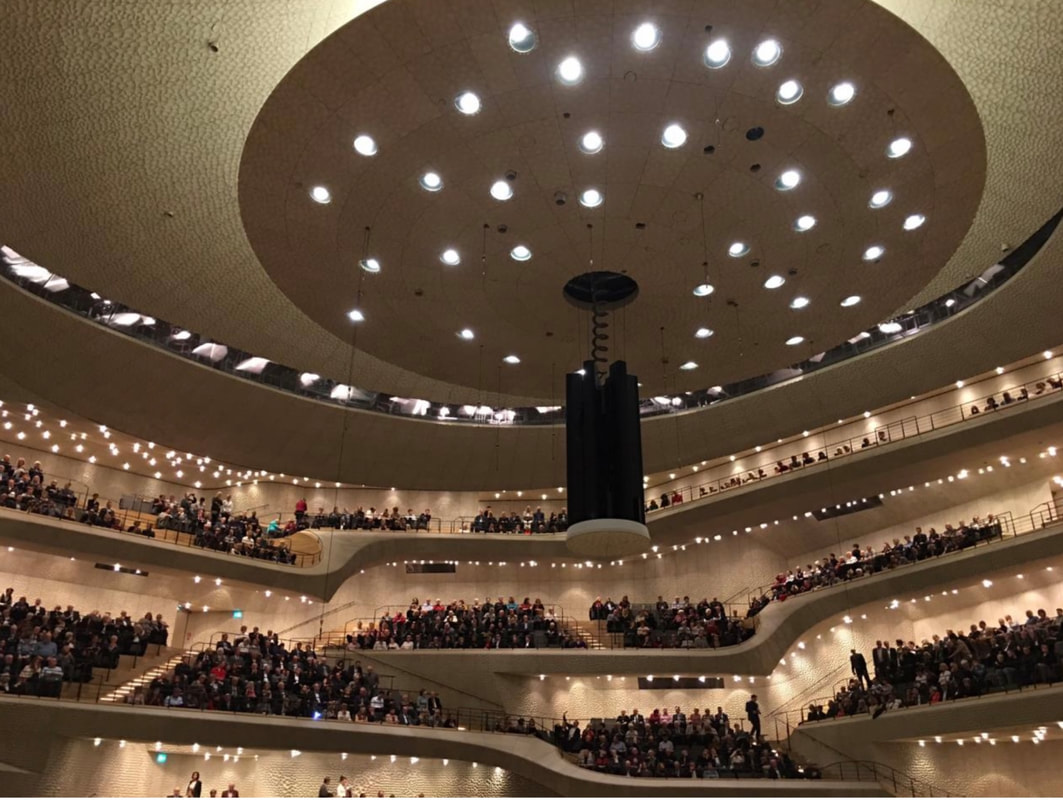 Philharmonic Hall
The decision to retain the 1960, nondescript warehouse and perch a lantern like structure, on top, whose only reference to the large hall hidden inside is the silhouette that harks to the 1963 Berlin Philharmonic. Only at night can the foyer spaces be differentiated from the hotel and the luxury apartments wrapped around the large central space. It recalls the many buildings where excavation is uneconomic and carparking is above ground, but no attempt is made to change the nondescript base that acts as a foil. 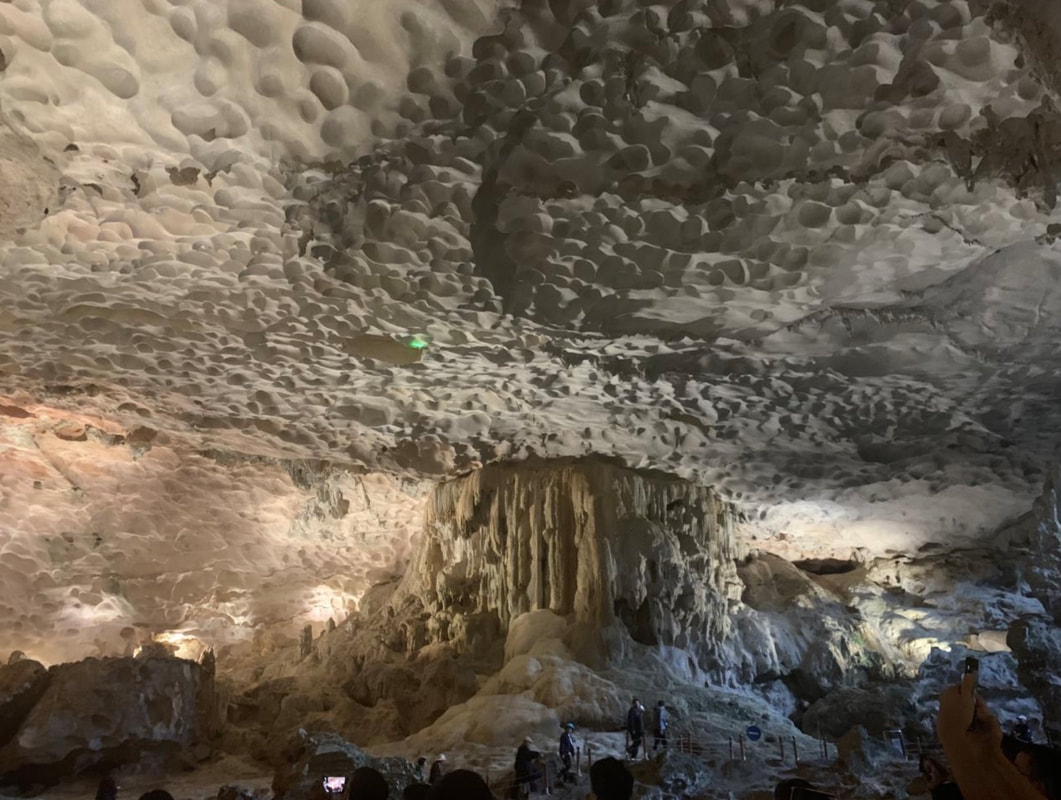 Some of the decorative textures in the complex evoke the large cave in Halong Bay, Vietnam.
The large-scale repetitive glass panels, oversized and screen printed around a generally concave circle, in many cases incorporating a crescent shaped window, are relieved by some recessed balconies. The huge glass panels could be compared to the portholes of the many ships and submarines that use the harbour. It can be argued that the facades of important buildings in history try to clearly represent the ideals admired at the time, earlier examples a classical respectability, or gothic revival’s search for purity, more recently love of technical innovation, and sometimes imagery without precedent. Looking out from the residential and hotel rooms, the windows reference giant portholes.

Acoustic wall panels
The building’s multiple functions, especially the hall, are not at all clear to the observer. There is no indication from the outside of the spaces inside, and in addition none of the usual signs of a building that welcomes large crowds are evident. There is no obvious entrance, a small opening gives access to the giant escalator that connects the undifferentiated plaza to the public space at the upper level, surrounded by a lookout open to the public. The hotel lobby occupies the adjoining space, that is of varied scale. The access via the extraordinarily long curved escalators, reinforces the cave metaphor, the destination revealed near the end. Using the numerous vertical access stairs, the sudden arrival in the giant hall is unexpected. 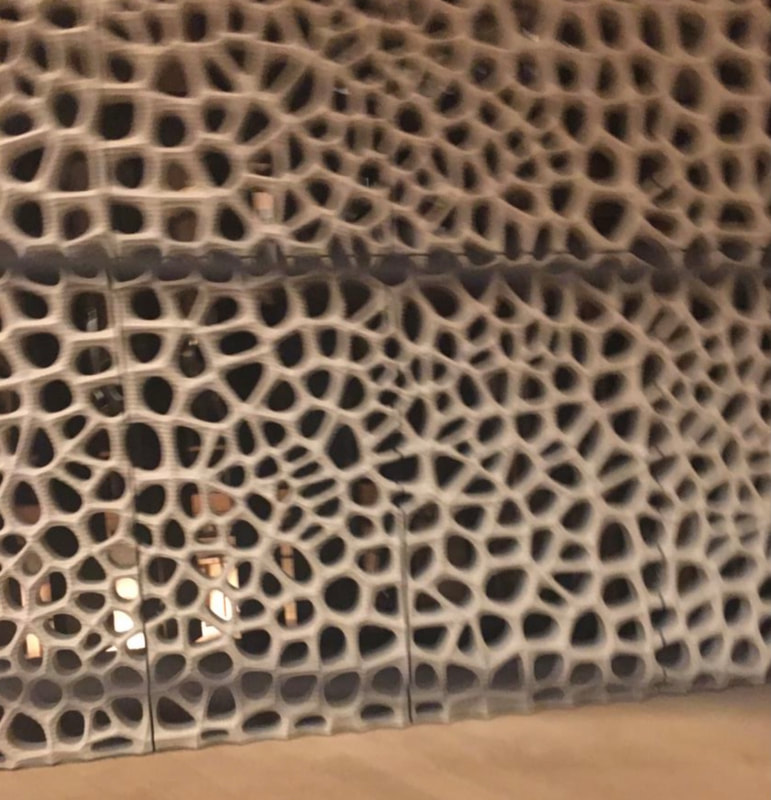 Wall screen
The vineyard style seating, combined with galleries perched along the sides, has been the preferred seating arrangement of recent halls. The access to the hall is unexpected, unlike the conventional progression through foyers, and has a strong element of surprise. Once seated there is a feeling of being trapped, and one of our party had a panic attack, and left. We can decide that the entrance and element of surprise is indeed a deliberate cave metaphor, but it is happily unselfconscious. The footprint of 5600 m2, is very small compared with 20,000 m2 of the Sydney Opera House, resulting in a vertically inhabited space, with vertical access from underneath.

Some useful comparisons and observations can be made about the precedent of inhabited walls that goes back to Medieval Castles, much admired by Louis Kahn, that also inspired of the Star War floating buildings. The supporting structure is secondary to the envelope, and the large space in my view is conceived as a cave, even the wall texture reinforces this. The caves in Halong Bay, Vietnam are a good example, their access special arrangements, even the wall texture, is reminiscent - not only the spatial composition.

The building is an improbably floating incomplete Cartesian volume, reflective by day of the watery surroundings and a beacon at night, with coloured lights. There are however very few clues to its function. It is like a crown as used by Basquiat, sitting uncomfortably on its brick base.
​
© Julius Bokor 2021 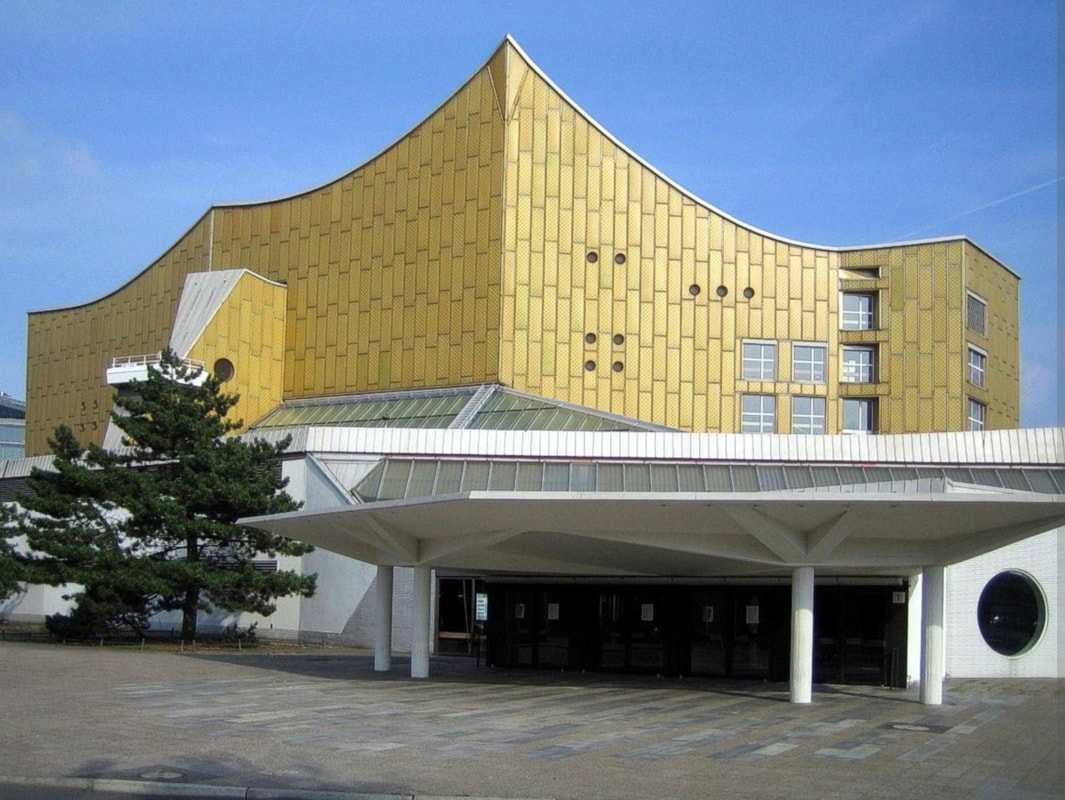