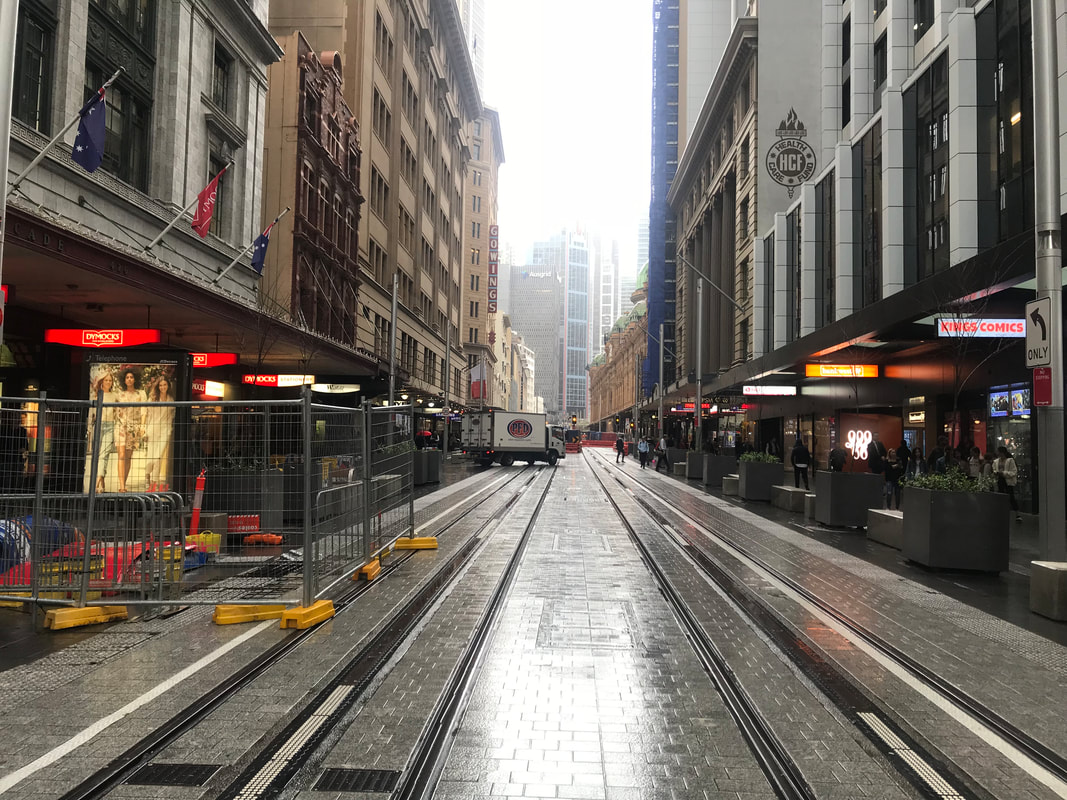 Sydney’s CBD and South-East Light Rail project is
attracting more than its fair share of controversy. But is grievance threatening to stifle what should be a celebration of urban transformation?

It took 70 years to finish Sydney’s Eastern Suburbs rail extension. Significantly, this used heavy rail to replace an existing tram network. But today, if one’s perceptions were to be shaped by the ABC and other media outlets’ news and current affairs reportage, you could be forgiven for thinking that Sydney’s new 12km light rail system linking Circular Quay to Randwick and Kingsford, is the greatest infrastructure catastrophe ever to hit Sydney.
​
In fact, the real catastrophe was the dismantling of Sydney’s comprehensive tram system in the late 50s and early 60s – carried out surrounded by the stench of political corruption. The loss of an extensive, reliable, regular and non-polluting mass transportation network was replaced by massively increased traffic congestion and air and noise pollution which stalks the city to this day.

Recently installed light rail track in George Street, Australia's first high street, along the same alignment as the original tramlines torn up sixty years ago. But the trams won't be running until May 2020, according to the latest estimate.
The politics surrounding the new light rail project are themselves intriguing. The project was initiated by the Keneally Labor government in 2010. It was implemented by the Coalition government in 2012 with a revised route. At the last state election the Labor Party opposed the scheme without ever properly explaining why, apart from suggesting it was too expensive.

Now, with the project beset by delays and cost over-runs, the opposition Labor Party points to incompetence and deceit on the part of the government, accompanied by a chorus of complaint about the disruption caused to businesses and homes along the alignment.
​
Well, firstly, if the rest of the world is anything to go by, cost over-runs and delays are regrettably par for the course for highly complex works such as these. The issue is: what price a first-class public transport system in a city with an arteriosclerotic road system? Critics need to put up or shut up. 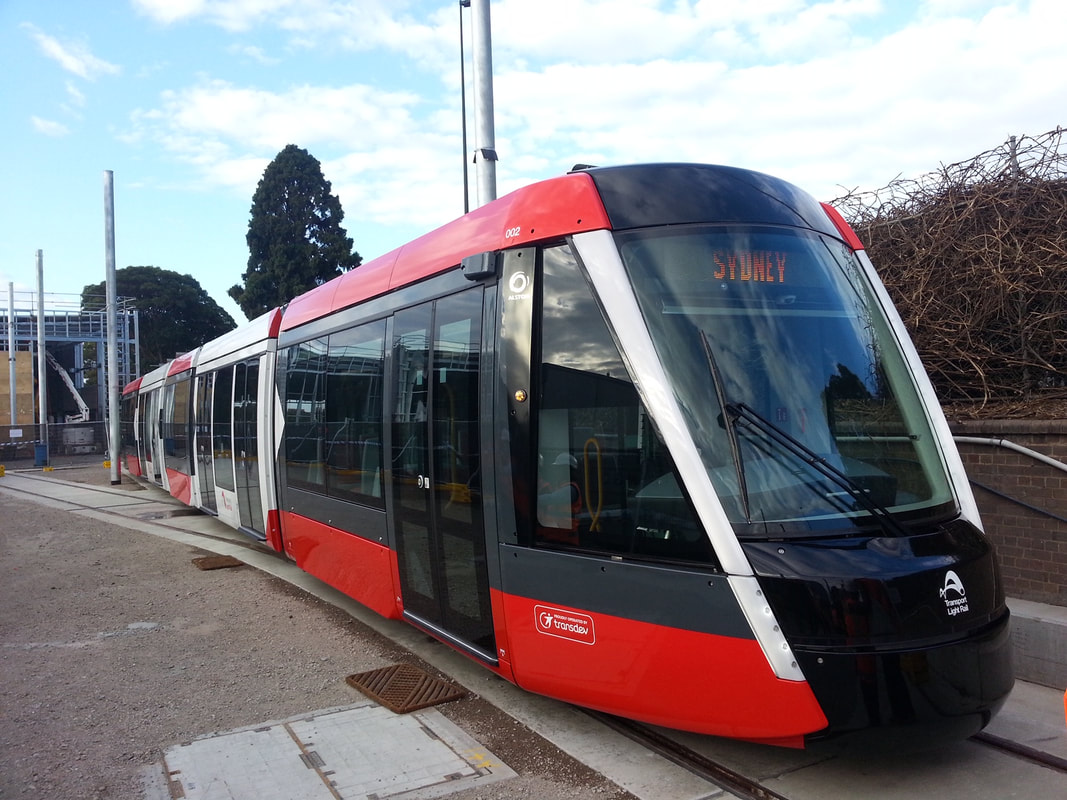 A recently delivered French built Alstom Citadis X05 light rail car which will eventually run through the heart of Sydney's CBD. Like the tram sets, which will be 67 metres long, the APS system which will deliver power without the need for ugly overhead catenary wires between Bathurst Street and Circular Quay, is also a French design, and was first used in the historic centre of Bordeaux.
As for the disruption – noise, inconvenience and property resumptions – it is simply a case of no gain without pain. It was anticipated, and complaints and compensation procedures were in place from the beginning. Complainants in the media and before the current parliamentary enquiry say they have been ignored. Whether this is the case and how widespread the discontent may be is difficult to ascertain. Otherwise, the main beef is that it has taken too long.

It is hard to find any credible objections to the scheme. There have been complaints about the many trees cut down to accommodate the tracks, along with concerns about local traffic disruption and loss of on-street parking (councils are spending a lot of money currently addressing the latter two issues). Otherwise, some critics flagged the cost of the scheme (originally budgeted at $1.6 billion, now blown out by at least $500,000), but without proposing alternative solutions to Sydney’s public transport and traffic problems.

Trackless trams are currently being introduced in some parts of the world. These are certainly cheaper than Sydney’s light rail model and can be implemented largely without the disruption of light rail, but the technology is still developing and they are currently only appropriate in certain urban conditions which don’t pertain in Sydney.

The French Alstom APS system being installed in Sydney will use 67 metre couple sets each with a capacity of 450 people and able to move up to 13,500 people per hour. In the CBD, between Bathurst Street and Circular Quay (two kms or 40% of George Street), the trams will have no overhead wires, adding to the hugely enhanced aesthetics of the precinct which will be pedestrianised between Bathurst and Hunter Streets. This system of supplying power at ground level has been introduced in a number of cities in France as well as in Dubai and Brasilia. Again, it is more expensive than systems using overhead powerlines, but it occupies a smaller footprint than the alternative and preserves the aesthetics of its urban environment.
​
The benefits of a modern light rail system are multiple. It reduces dependency on motor vehicles and the buses which have blighted Sydney’s roads for 60 years. It reduces greenhouse emissions and noise pollution (being significantly quieter than earlier trams). It reduces congestion, it’s regular and more reliable, provides predictable travel times and offers a far more comfortable journey than buses – features already evident on the highly popular existing Dulwich Hill line running to Sydney’s inner western suburbs.

Yes, I am a tram enthusiast. And – without getting too political about it – I think we should be celebrating a project which will transform the CBD and Sydney’s inner south-eastern suburbs. This is especially the case when we consider the Parramatta (Westmead to Carlingford via Parramatta) and Newcastle light rail projects and the emerging Metro City and Southwest Metro (linking north and south with a new Harbour tunnel) which, as they interface with existing heavy rail lines, start to look like a real public transport system.

No one would suggest that such massive infrastructure projects should not be subject to scrutiny. Governments are required to spend public money responsibly – something, perhaps, to be borne in mind when considering the current dispute between the NSW government and the light rail’s major sub-contractor, Acciona, over cost blow-outs.

Endorsing the government’s strategy should not be seen as a politically partisan thing. Support for ambitious infrastructure programmes such as these helps to ensure that future governments will have the conviction and vision to pursue similarly challenging, but transformative urban projects.